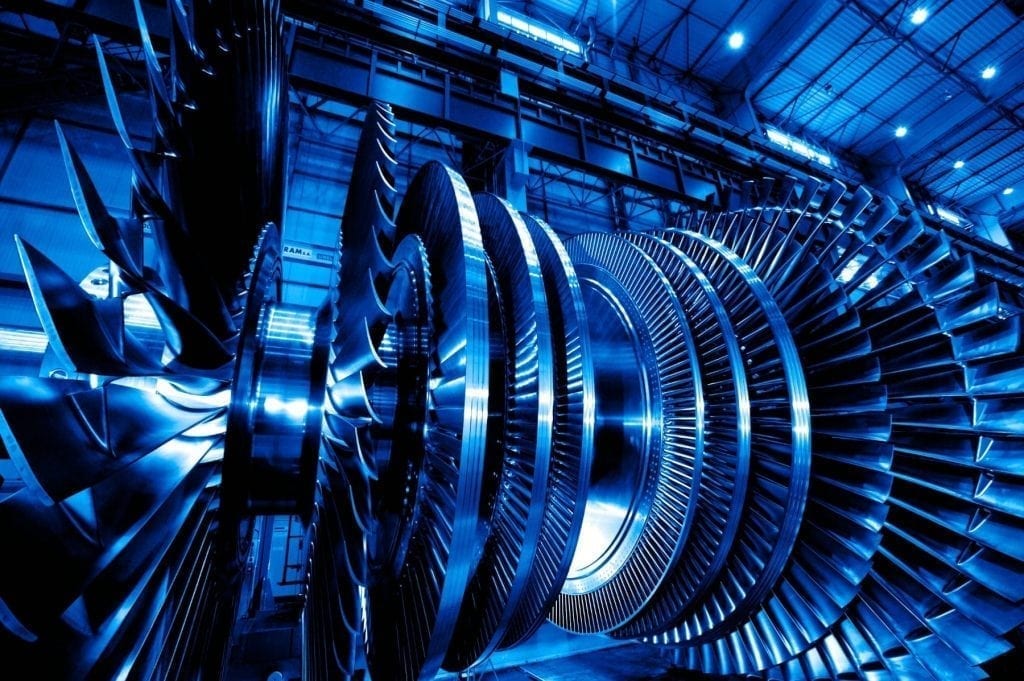 The later stages of low pressure (LP) turbine blades operate in a low quality steam environment. Design moisture levels can range from 1 or 2 percent all the way up to 15 percent. Units that suffer from reheat or main steam temperature droop at low loads can significantly increase moisture levels and subsequent rates of erosion. There has been a trend in merchant plants to reduce minimum load to the furthest degree possible to mitigate operating losses during periods of low demand and energy pricing. Figures 1a and 1b provide two examples of typical erosion damage experienced on the last stages of a fossil LP design. As noted, there is significant cut-back and loss of blade material from erosion. For these examples, the leading edge of the last stage included a soldered stellite shield to mitigate erosion. Other designs include induction-hardened leading edges to accomplish the same design task.

When making repair decisions, it is important to note later stage LP blades are tuned to avoid resonances at multiples of running speed. These blades experience vibratory steam excitation from:

LP blades see these upsets in steam flows as non-uniform steam pressures, velocities, and/or flow angles at multiples of running speed. If resonance exists between the natural frequency of a blade or blade group and fundamental multiples of running speed, high-cycle fatigue failures can occur. The resulting vibratory response of the blade to this harmonic excitation will dictate whether one or more of the blade natural frequencies must be tuned away from harmonics of running speed. For blade modes that cannot be tuned, it is necessary to keep the resulting vibratory stresses below the endurance limit of the respective materials. Figure 2 provides an example Campbell Diagram which illustrates the number of modes that are typically tuned for a last stage nuclear blade.
It is crucial to recognize the loss of blade material, from erosion or other causes, which can significantly alter a blade or groups vibratory response away from design; and, perhaps reduce or eliminate margins from multiples of running speed. It is rarely a reasonable course of action to do nothing and leave severe erosion untouched.

Figure 3 shows a silver solder and stellite repair in progress which was completed by a major U.S. utility. The repair restored the original blade geometry.

Low Pressure Blade Lacing wire (GE design) and lashing lug (Westinghouse/Siemens) cracking are common findings during major outage inspections of LP turbine blading (see Figure 4). In some cases, the GE design lacing wire extends through multiple blades to form groups. The connection is typically brazed to the blade. In other cases, the GE type design is a loosely fitted wire that is intended to float in the blade hole and provide additional mechanical damping of the blade group. The Westinghouse/Siemens vintage blade design usually has a lashing lug that is Inconel welded to adjacent blades to form a pre-determined grouping of blade multiples.

Lashing wires and lugs are areas where it is common to find cracking. If not addressed, cracked lashing wires can produce unique and off-design blade frequencies that can lead to a resonance failure. This should be an area where careful NDE is completed during an outage. In some cases, removal of the brazed material is required to detect hidden blade cracking at this high-stressed location. Fortunately, most cracking can be detected and repaired in place. Additional shot peening operations have been added to the lashing lug repairs to provide enhanced high-cycle fatigue resistance.

The later stages of low pressure turbine blading are typically tuned to avoid resonance with fundamental steam excitation frequencies (typically up to the 8 harmonic of running speed). At these frequencies, LP blades see upsets in steam flows as non-uniform steam pressures, velocities, and/or flow angles. If a blade’s natural frequency is resonant with one of these multiples of running speed, rapid high-cycle fatigue failure can occur. Low pressure blades that have significant service time can suffer from water droplet erosion damage and also cracked lashing lugs. This damage can significantly alter a blade or blade group’s natural frequency, which in some cases, result in a resonance condition. To avoid this condition, careful inspection and repair of lashing/lacing wire cracking must be completed. In addition, water droplet erosion damage will gradually remove blade material and cause blade natural frequencies to shift higher in their frequency band. If there is insufficient margin, blade resonance can occur. Options to restore/repair blade water droplet erosion damage that is described herein should be explored at each major outage if significant blade erosion is found.

Find out how TGA can help you with Don’t Lose Your Tune with Turbine Blade Damage.

NextTurbine Water Induction Protection SystemsNext
We use cookies on our website to give you the most relevant experience by remembering your preferences and repeat visits. By clicking “Accept All”, you consent to the use of ALL the cookies. However, you may visit "Cookie Settings" to provide a controlled consent.
Cookie SettingsAccept All
Manage consent