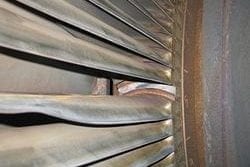 Based on a recent assessment of nuclear and fossil generating stations in Europe, TG Advisers identified various levels of torsional vibration concerns in more than 25 units. This was a surprising result considering the relatively long and successful industry history of understanding and addressing this dangerous failure mechanism.

The reasons for these concerns were related to one or more of the following factors:

The study included both nuclear and fossil units. Though the last three stages of a nuclear LP are most susceptible due to longer blade lengths and lower frequencies, failures of last stages of fossil LPs have also occurred. Less common retaining ring damage, generator shaft coupling cracking and other exciter PMG concerns also have been documented.

We believe operators of large generating units commissioned before 1985, or that recently completed a major unit train upgrade, should carefully review system torsional adequacy. Those contemplating a major upgrade or new unit purchase should introduce appropriate torsional system design criteria and contractual requirements. In this article, we provide background of the issue, recommendations to address concerns and a case study.

The first reported failures due to system torsional double-line frequency resonance are believed to have occurred at the Cleco Coughlin fossil plant in 1968. LP blade failures at this plant were attributed to high generator phase unbalance/-negative sequence currents, coupled with steam turbine generator system resonance.

In 1973, the first blade failures at a nuclear station occurred at Prairie Island. Exhaustive analysis and strain gauge testing confirmed the last few low pressure turbine blade rows, which had repeatedly failed, were responding to 120 Hz torsional excitation from the generator and occasional transients caused by grid disturbances. The 120 Hz excitation was traced back to unbalanced phases due to frequent on/off operations of a local electric arc furnace. The faults were caused by line touching during winter ice storms. After a relatively short service time under these conditions, the blades failed due to combined high- and low-cycle fatigue.

One of the most damaging events occurred in 1985 at the Taiwan Power Manshaan nuclear power plant.  This failure resulted in complete loss of the exciter shaft, later stage LP blades and a 2-day fire. From these events it became clear that blade failure could quickly occur if the combined rotor shaft system, coupled with the blade and discs of the low-pressure turbine, had torsional natural frequencies at or near double-line frequency. Subsequent damage could be severe, with extensive property damage and potential loss of life. As a result, all OEM’s in the industry undertook a significant effort to develop analysis techniques to predict and address double-line frequency torsional resonance. This was combined with the extensive testing applied to new and existing units and development of strategies to address potential failures. Units at high risk were either modified and/or provided with online monitoring and protection.

Verification of turbine-generator compatibility with the local grid system has long been a part of the design process. In the early 1970s, this was typically accomplished by analyzing all line excitable turbine generator train frequencies below 60 Hz (sub-synchronous) using a classical lumped mass modeling approach. This method did not account for super-synchronous vibrations and blade disc coupling.

The use of “continuum” and “finite element” models for calculation of torsional frequencies came into use to address the failures mentioned above. The lumped mass approach employed discrete mass and spring elements to represent the major train elements. The continuum and finite element methods represent each train component as a series of smaller sub-sections or finite elements, with both mass and spring characteristics (Figure 1). In addition, these approaches account for LP blade and disc coupling (Figure 2) for the susceptible LP stages, a critical factor for accurate calculation of the full range (sub and super synchronous) torsional natural frequencies.

Many operating units commissioned in the early 1970s were not analyzed for 120 Hz torsional resonance. Some had natural torsional frequencies close to 120 Hz, but did not experience failures until changes to the grid and/or system load profile resulted in the excitation of these modes.

More commonly, in TG Advisers experience, failures resulted from incomplete or incorrect modeling and assumptions of the turbine generator train after a major upgrade (e.g. LP or generator rotor changes or blade upgrades).  In some cases, requirements for avoiding 120 Hz torsional resonance were not included in owner specs or supplier design criteria. In all cases, the supplier performing the upgrade failed to properly evaluate the impact on overall train torsional frequencies. Sometimes the supplier was not the OEM of the original equipment and made incorrect assumptions in modeling non-upgraded, original components. Compounding the issue is an increasing OEM trend to reduce torsional testing relying almost exclusively on analysis.

Note that it is possible to have acceptable torsional frequencies in this range. For example, if a mode shape is symmetric through the generator, the excitation torque will net zero due to cancellation (see Figure 3, online). If the mode shape is not symmetric, that particular mode might be problematic if sufficiently close to 120 Hz. In addition, modes like HP, IP and Jackshafts that have no generator displacement, as shown in Figure 4 (online), cannot be excited and are acceptable if they are close to double-line frequency.

When purchasing new units, or upgrading existing units, require the supplier to demonstrate that there are no unacceptable torsional natural frequencies between 112.8 Hz and 127.2 Hz for 60Hz units. This is a conservative requirement, but one that will prevent problems. This is also aligned with the new ISO criteria, listed in Table1.

In addition to requiring a calculated result, the supplier also should demonstrate correlation of results with tests on other similar units, or confirmation via a shop or field torsional frequency test.

If such testing shows any unacceptable torsional frequencies, the supplier should be required to supply detuning modifications. In the absence of any data, always default to a test, especially for non-OEM retrofits. For these cases, pre- and post-retrofit testing is the safest bet to assure the mixed system is designed with sufficient margin.

Operators of existing units with no plans for retrofit should consult with the equipment OEM or a qualified third party to assess the need for any verification of system torsional acceptability.

A major U.S. energy company retrofitted its fossil generator (complete off-the-foundation retrofit) with a non-OEM design available for a quick outage turnaround. The original 1950s generator had both stator and rotor issues, which were assessed as having a high probability of near-term failure.

Prudent specification measures were taken, requiring the new generator supplier to perform a complete analysis.  The result showed more than enough margins. After approximately 6 months of operation, the unit experienced a last stage blade failure. The event triggered a number of questions about the torsional analysis and prior maintenance OEM and owner practices.

As a result of post outage due diligence analysis, it was discovered that the models used for the retained components were crude estimates made by the generator supplier. This triggered additional testing and finally a redesign of the unit to detune critical torsional frequencies away from 120 Hz. The modification implemented included shortening the jackshaft between the LP and generator and installation of a massive spacer ring, as shown in Figure 6 (online). The unit has subsequently been operating successfully for more than 3 years with no blade or system issues.

The author would like to thank James B. Lewis, PE, from Consumers Energy for use of Figures 5 and 6, and the opportunity to participate in the root cause analysis.

Find out how TGA can help you with Torsional vibration concerns on steam turbine generator retrofits.

PrevPreviousEvaluate steam turbine control valve seat interference
NextSteam turbine high temperature casing crackingNext
We use cookies on our website to give you the most relevant experience by remembering your preferences and repeat visits. By clicking “Accept All”, you consent to the use of ALL the cookies. However, you may visit "Cookie Settings" to provide a controlled consent.
Cookie SettingsAccept All
Manage consent