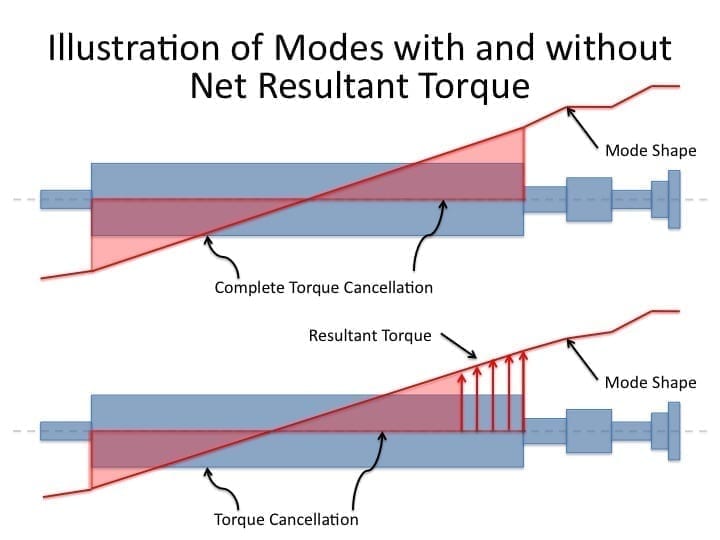 In the early 1970’s, the industry experienced a number of unsolved low-pressure turbine blade failures. The most notable occurred at the Prairie Island Nuclear plant with repeated failures of the last few rotating rows. Exhaustive analysis and strain gauge testing revealed the blades were responding to steady torsional excitation from the generator created by phase/load unbalances at 120 Hz and occasional transients caused by grid power line faults.

The line/phase unbalance, which produced a continuous 120 Hz blade vibration response, was traced back to unbalanced phases due to frequent on/off operations of a local electric arc furnace. The faults were caused by line touching during winter ice storms. After relatively short service time under these conditions, the blades failed due to combined high and low cycle fatigue.

Virtually all OEMs have experienced LP turbine blade failures related to torsional excitation. In 1985, one OEM published a worldwide notification alerting utilities of the issue after a high profile failure at a plant in Taiwan. It became clear if the combined rotor shaft system coupled with the blade and discs of the low-pressure turbine had torsional natural frequencies at or near 120 Hz, blade failures could quickly result.

Although the last three stages of a nuclear LP are more susceptible due to longer blade lengths and lower frequencies, failures of last stages of fossil LP’s have also occurred. Less common retaining ring damage and other exciter PMG concerns have been documented. Most recently there was an event in the US triggered by a replacement generator that shifted critical torsional frequencies into the 120 Hz range resulting in last stage blade failures after approximately 6 months of operation.

Verification of turbine-generator compatibility with the local grid system has long been a part of the design process. In the early 1970’s, this was typically accomplished by analyzing all line excitable turbine generator train frequencies below 60 Hz (sub-synchronous) using a classical lumped mass modeling approach. This method did not account for super-synchronous vibrations and blade disc coupling.

The use of “continuum” and finite element models for calculation of torsional frequencies came into use to address the failures mentioned above. The lumped mass approach employed discrete mass and spring elements to represent the major train elements. The continuum and finite element methods represent each train component as a series of smaller sub-sections or finite elements with both mass and spring characteristics (see figure to the right). In addition, these approaches account for LP blade and disc coupling for the susceptible LP stages, a critical factor for accurate calculation of the full range (sub and super synchronous) torsional natural frequencies (see below figure).

Although torsional excitation has long been recognized as an issue, failures are still occurring. There are two reasons. First, many operating units commissioned in the early 1970’s were not analyzed for 120 Hz torsional excitation. Some of these units had natural torsional frequencies close to 120 Hz but did not experience failures until changes to the grid and/or system load profile resulted in the excitation of these modes.

More commonly, in TG Advisers experience, failures resulted from incomplete or incorrect modeling and assumptions of the turbine generator train after a major upgrade (e.g. LP or generator rotor changes or blade upgrades). In some cases, requirements for avoiding 120 Hz torsional resonance were not included in the owner specification or supplier design criteria. In all cases, the supplier performing the upgrade failed to properly evaluate the impact on overall train torsional frequencies. Sometimes the supplier was not the OEM of the original equipment and made incorrect assumptions in modeling the non-upgraded, original components.

When purchasing new units, or upgrading existing units, require the supplier to demonstrate that there are no unacceptable torsional natural frequencies between 113 Hz and 128 Hz. This is a conservative requirement but one that will prevent problems.

Note that it is possible to have acceptable torsional frequencies in this range. For example, if a mode shape is symmetric through the generator, the excitation torque will net zero due to cancelation (see figure to the right). If the mode shape is not symmetric, that particular mode may be problematic if sufficiently close to 120 Hz.

In addition to a calculated result, the suppler should also demonstrate correlation of results with tests on other similar units or confirmation via a shop or field torsional frequency test. If such testing shows any unacceptable torsional frequencies, the supplier should be required to supply detuning modifications or a monitoring system.

Find out how TGA can help you with Torsional Vibration Failures of Large Steam Turbine Generators.

PrevPreviousStress Corrosion Cracking (SCC) of Low Pressure Rotor Blade Attachments
NextSteam Turbine and Generator Reduced Minimum Load ConsiderationsNext
We use cookies on our website to give you the most relevant experience by remembering your preferences and repeat visits. By clicking “Accept All”, you consent to the use of ALL the cookies. However, you may visit "Cookie Settings" to provide a controlled consent.
Cookie SettingsAccept All
Manage consent