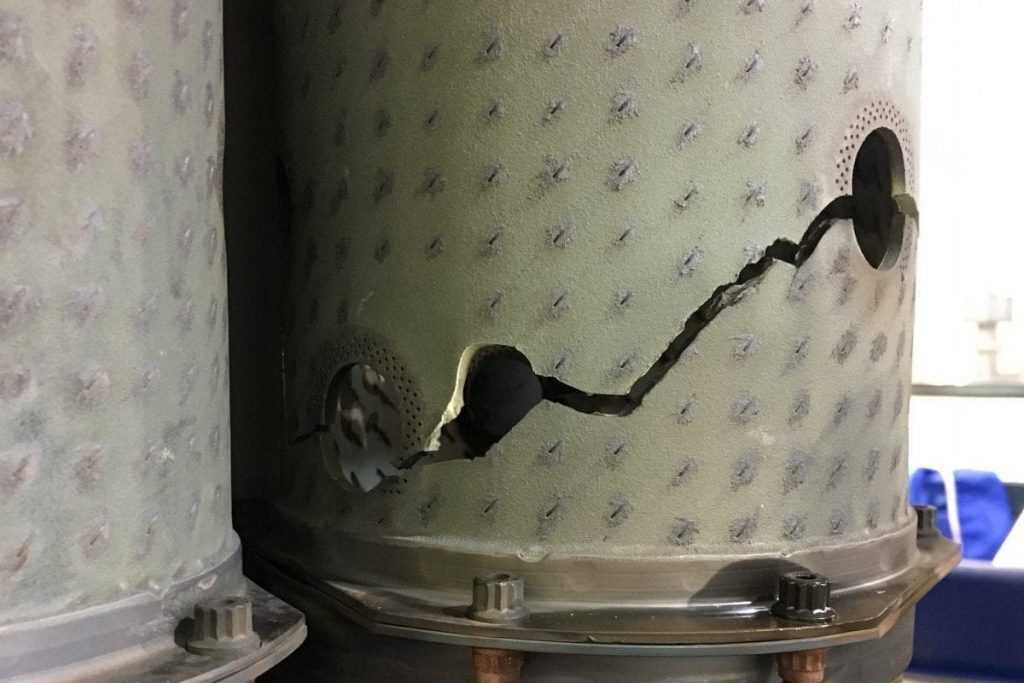 Gas turbine maintenance intervals are determined by hours, starts, or a combination of both. The latter is often referred to as equivalent operating hours (EOH). The increasing integration of renewable energy sources into generation portfolios has meant changes in dispatch, and many traditionally base-loaded assets are being forced to load follow and on-off cycle, as seen in many gas turbine and combined –cycle arrangements across the country.  With such shifts in operational patterns comes a shift in the failure modes that manifest, as well as the inspection techniques required to effectively diagnose these respective modes. Given the competitive marketplace, it is valuable to understand applicable failure modes and inspection techniques to effectively balance the fine line between scrapping parts prematurely and running hardware beyond a safe condition.

Cycling vs. Base Load Failure Modes

When a unit starts and stops, it is exposed to a significant cyclic stresses in addition to large thermal transients in the high temperature sections of the engine. This can lead to thermal mechanical fatigue or low-cycle fatigue cracking. After cracks begin, they continue to propagate with each new cycle.  If not addressed in time, liberation of a rotating blade can lead to substantial forced outage time and repair costs.

For cycling units, it is also common to sustain damage at interface or contact surfaces. Damage occurs from the repetitive relative movement between surfaces or as a result of increased deflection of the rotor through critical speeds. Some examples of these surfaces include rotor to blade root interfaces, tip contact faces on adjacent shrouded blades, and compressor or turbine blade tips. In addition cycling has been shown to increase coating spallation rates for coated parts, leading to premature oxidation of the hardware. The impact of cycling is not limited to a single section of the gas turbine. TG Advisers has been involved in root cause failure analyses ultimately attributed to cycling in the compressor, combustion, and hot sections of gas turbines.

It is also important to understand base load failure modes. Base loaded machines are mainly limited by failure modes that result from prolonged operation at elevated temperatures. These failure modes include creep, coating/surface oxidation damage, and embrittlement. Creep damage is very difficult to detect non-destructively. As a result, hot section rotating blades often have conservative life guidelines. This design philosophy is understandable given the scatter in material properties, difficulty of detecting creep, and severity of a blade failure. The risk for failure modes that require extended time at high temperatures, such as creep, is less in gas turbines that exhibit cycle dominated maintenance intervals.

The key to effective inspections is understanding the applicable failure modes and how they manifest. This holds true for broad condition inspections such as in-situ borescope inspections, as well as for detailed inspections completed during major outages.

Prior to overhaul, and as a routine maintenance practice, users should complete borescope inspections at recommended intervals. Although not a precise indicator of part condition, signs of major damage such as large crack indications, excessive wear or oxidation, foreign object damage, tip rubbing and missing coating should be explored. It is important to document damage that occurs over time in order to track the progression of known conditions.

During major overhauls, users should conduct cycling-targeted, non-destructive testing (NDT), particularly on rotating hardware. Depending on material, there are multiple NDT techniques that can identify cracks.  These include liquid penetrant, magnetic particle, and eddy current inspections. Users should complete pre-and-post repair inspections, especially if weld repair is required. In addition, they should inspect the integrity of the coating and determine if new coating are required. Always review repair inspection reports for non-conformances so as to understand the condition of your hardware prior to reuse.

With inspections results in hand, it must then be determined if it is safe to continue to use hardware.   Recall the difference in failure modes between base loaded and cycling machines and the fact that many parts are life limited by time at temperature failure modes. When coupled with the results of the cycling targeted failure mode inspections, knowledge of the accumulated operating hours of hardware enables educated decisions concerning part reuse.  Given the cost of replacement hardware, significant monetary benefits can be realized using this strategy.

Find out how TGA can help you with Renewable Energy – Pushing Gas Turbine Components to their Cycling Limit!.

PrevPreviousDynamic Reinspection Intervals
NextGenerator Boresonic Inspection Interval ExtensionNext
We use cookies on our website to give you the most relevant experience by remembering your preferences and repeat visits. By clicking “Accept All”, you consent to the use of ALL the cookies. However, you may visit "Cookie Settings" to provide a controlled consent.
Cookie SettingsAccept All
Manage consent